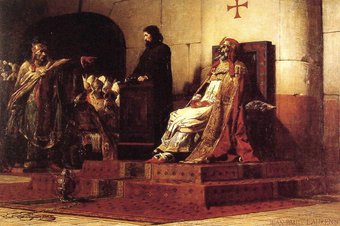 Pope v. Dead Pope — A court case from back in the day when the Vatican could be trusted.
I’ve been paying attention to Vatican City ever since the current pope came into power. Who does this guy think he is with all of this tolerance business? What happened to the good old days, back when popes exhumed the bodies of their predecessors, put them on trial, and then chopped off the corpse’s fingers? Back when they held fifty-person sex parties in which prostitutes had to pick up chestnuts with their hoo-haws. Back when anyone who had the audacity to suggest the earth revolved around the sun was tortured appropriately. This newfangled, benevolent, papal behavior can’t be legit.  That little country is just giving the world the old rope-a-dope. Soon enough the Vatican will come out swinging like Ali. If we don’t pay attention we're all gonna go down like Foreman.

Reasons to be leery:
WALL-Eek! -- When Pope Leo the Fourth said, "Build that wall!" that motherfucker got built! More than one actually. In fact the Holy See has been surrounded by walls for 1,200 plus years. Who knows what they've gotten done in that amount of time. My guess: a hydrogen bomb that poses as a lovable robot. It runs on cold-fusion, prayers, and the blood of Martin Luther. 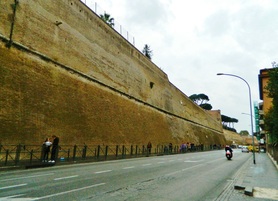 Pope Leo the Fourth got San Marino to pay for this.
​Don’t Miss the Swiss Guard — The Swiss Guard dress like they are unemployed court jesters. In reality they are well-employed mercenaries with a specific set of skills (ala Liam Neesom).  If they decide to employ said skills against us, we’ll be in a world of hurt. 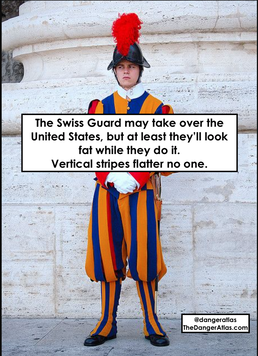 ​451 — That's the Vatican’s total population. The Internet said so. If it was only 450 I wouldn’t be as concerned, but 451 well that’s not a population that you can just write off. Indeed, Frank Miller taught me that an army of 300 can fight off an entire horde of mutants with claws for arms, so maybe my drawing a line at 450 was foolish.  The Vatican actually has 151 more than they need to take down the United States. Shit, we don’t even have one mutant with claw-arms.

How can we defend ourselves if we don’t have a single one of these fuckers? Maybe Lockheed Martin can figure out a way to manufacture some.
​Dynamite Comes In Small Packages — The Vatican is the smallest country in the world.  Well, you know what else is small?  Gram negatives and the Zika virus and box-jellyfish, and all of those things are deadly as fuck. 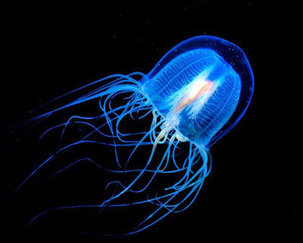 Box Jelly more like Box Deadly. (See what I did there—replaced the word “jelly” with“deadly." Hilarious.)
​Zombie Army — St. Peter’s Basilica is named St. Peter's Basilica because St. Peter and a whole bunch of other Christians are buried underneath. They were put there by Nero (Rome Nero not Matrix Nero) who used them as a scapegoat for his own pyromania.  This means that when the dead rise the Vatican will have an entire army of Christian zombies ready and willing to do their bidding.  American zombies will not be as loyal to the President as Vatican zombies will be to the Pope.  Politics is just too divisive in this country, even amongst the formerly-deceased, pro-brain-consumption, community. 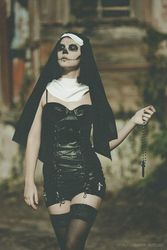 When I googled “Catholic Zombies” I got this picture of a sexy nun zombie. I have no clever caption. I just wanted to share.