Portugal’s borders haven’t changed since 1139. Logic would suggest that this means they aren’t looking to expand. Unfortunately, logic is an ignorant hussy. The Portuguese have already managed to infiltrate the White House. For evidence see above.

Additional reasons to be terrified:

Parseltongued Portuguese Provocateurs— For most of the twentieth century Portugal was ruled by a dictator named Slytherin. Although every legitimate historical resource claims otherwise, I am certain that it was Salazar. Basically, we have a country full of Death Eaters on our hands. 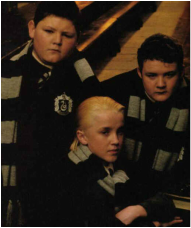 Above is a picture of the Portuguese boy band, N’Snitch, aka Boys II Wizards, aka Basilisk Boys, aka 98 Azkabanees. Every member of the band is the bad boy.
​Cork Monopoly — Almost all of the world’s cork is produced in Portugal. Should they decide to cut off our supply we’ll be totally effed in the A. We’ll have to buy wine with synthetic corks like we’re middle-class housewives going to family Christmas parties.  Also, high school girls will be unable to use pushpins to make cluttered collages above their desks.  Also, the phrase “put a cork in it” will lose all meaning.  When you say it to people they’ll just keep on talking.

I don’t own any of these ridiculous products and now I never will. Damn you, Portugal.
​Magellan: The Best Amateur Urologist On the Iberian Peninsula — Portugal is home to Magellan, the first man to circumnavigate the globe. When the Portuguese take over the world they will more than likely follow in their famous countryman’s footsteps and start circumnavigating everything. This terrifies me. I like my foreskin. 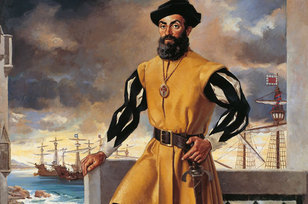 This is a picture of Magellan following a particularly tricky circumnavigation. The sword in his left hand was used to remove millions of foreskins.
​Port-ugal More Like Fort-ugal— Portugal came up with port, which is a type of fortified wine.  Their motives here concern me.  Why would they feel the need to fortify wine? Were the wine's natural defenses not strong enough? Are they planning on attacking other countries’ wines? I sure hope not. The wines of Napa Valley have notoriously weak battlements. They won’t stand a chance. This might be the USA’s Achilles heel. Also our torts system, our public schools, the electoral college, and Khloe Kardashian (yes, just Khloe, Kim is misunderstood). 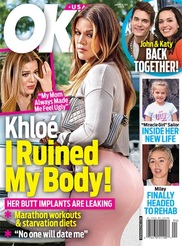 Sorry. Autocorrect. * My Body = America and *Her butt implants are leaking = This is the end times
​Vaya Con Dios, American Banking System — The biggest wave ever surfed was in Portugal (90 feet!). I suspect that this is where Bodhi was at the end of the film Point Break. I further suspect that Bodhi didn’t actually die surfing that wave. I think that he succeeded, immigrated to Portugal, and began teaching the Portuguese how to steal from U.S. banks.  At some point in the near future there will be a string of robberies on American banks perpetrated by Bodhi-inspired Portuguese thrill-seekers. Having learned from the mistakes of the Ex-Presidents gang, they will do a better job of hiding their tan lines and surf wax and succeed in bankrupting the entire U.S. financial system. Without Johnny Utah there to save us the United States will crumble. Portugal will rule the world. (I hope to god you’ve seen the original Point Break otherwise you just wasted 45 seconds of your life reading the previous paragraph, which couldn’t have possibly made any sense to you.) 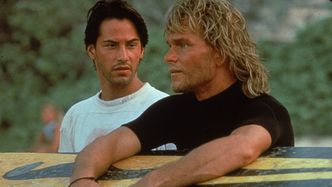 “If you want the ultimate, you've got to be willing to pay the ultimate price. It's not tragic to die doing what you love.” Profound dialogue from a classic film. How could you not have watched this gem. And look at Swayze's hair, what a dream boat. R.I.P Homie.