MONGOLIA: They’re Not Horsing Around 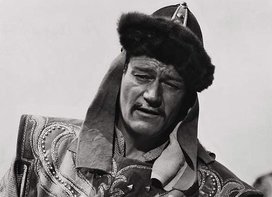 Yup, John Wayne played Genghis Khan. Racist? Perhaps. But the Mongols got the last laugh. The movie was filmed on a nuclear test site. The Duke and pretty much everybody else in the film died as a result. Game, set, match, Mongolia.
​
​Roughly 800 years ago Genghis and Kublai tore shit up.  They took some horses and a horde and made Eurasia their whore.  If we don’t stop them it seems likely that modern-day Mongols will do the same thing, but this time it won’t just be Eurasia, it will be the world.
We Will All Have Long Faces — Horse culture is huge in Mongolia.  Indeed, some white lady that was visiting the country once said, “A Mongol without a horse is like a bird without wings.”  Some people may think that this is just a part of their culture—a byproduct of a nomadic lifestyle.  To that I say, “Quit fooling yourself you ignorant sluts.”  The Mongols definitely have ulterior motives.  My best guess: They are cornering the horse market; they will then use their monopoly to blackmail wealthy influential parents with bratty daughters that demand ponies for their birthdays.  Their backs against the wall, the wealthy, influential parents will give the Mongols whatever they want.  And what will they want? … Total world domination, obviously. 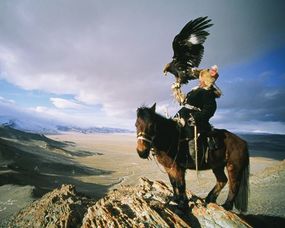 A Mongolian dude with a horse and a hawk. You can’t get more badass than that. Stop trying.
​No Butts About It — Roughly 1 in 10 white babies, 2 in 3 Hispanic babies, 3 in 4 Asian babies, and 9 in 10 African babies suffer from Mongolian Blue Butt, a skin malady that makes it look as though the tiny humans have bruises all over their tukhus.  This is clear evidence that Mongolians are already all over our asses.

Mystique had Mongolian Blue Butt, now she is a deadly assassin determined to extinguish all humans that aren't Mongolian.
​“A Girl Like That Doesn’t Come Around Every Dynasty” — The Mongols were stopped once before so we should be able to stop them again, right?  Wrong.  We were only able to halt their invasion the first time because we had Mulan and a bunch of incompetent soldiers dressed as concubines on our side.  They used a combination of elegant folding fans and cross-dressing to destroy the invading horde.  Unfortunately, Mulan has been worm food for millennia, and, with Caitlyn Jenner dominating the news cycle, cross-dressing has become too much of a hot button issue for our soldiers to touch—even the incompetent ones.  We still have Mushu, but he hasn’t been the same since Daddy Daycare. 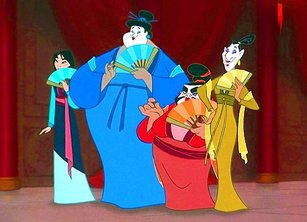 Mulan with her concubines. A fighting force this strong no longer exists.
​Shit Tons of Snow Leopards — Mongolia has a shit ton of snow leopards, about one third of the worlds total population in fact.  Somehow they have made it so these leopards cannot roar or purr, which means they’re silent—silent but deadly. 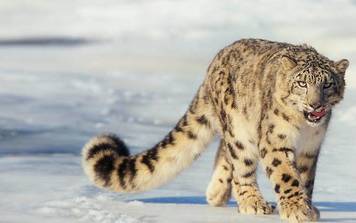 He’s licking his lips because the Mongolians taught him to salivate at the sight of Americans.
​Two Humped Camels… Two! — In her seminal work “Everyone Poops” Taro Gomi taught me that two humped camels make two humped poops.  This is the most dangerous type of poop.  Americans have no equivalent.  If the Mongolians decide to use this against us we’re fucked, just totally fucked.
​Wrestle-maniacs — Everybody wrestles in Mongolia, everybody.  The only things that Americans do with such consistency is drink high fructose corn syrup.  If the war between us devolves into hand-to-hand combat,we don’t stand a chance.